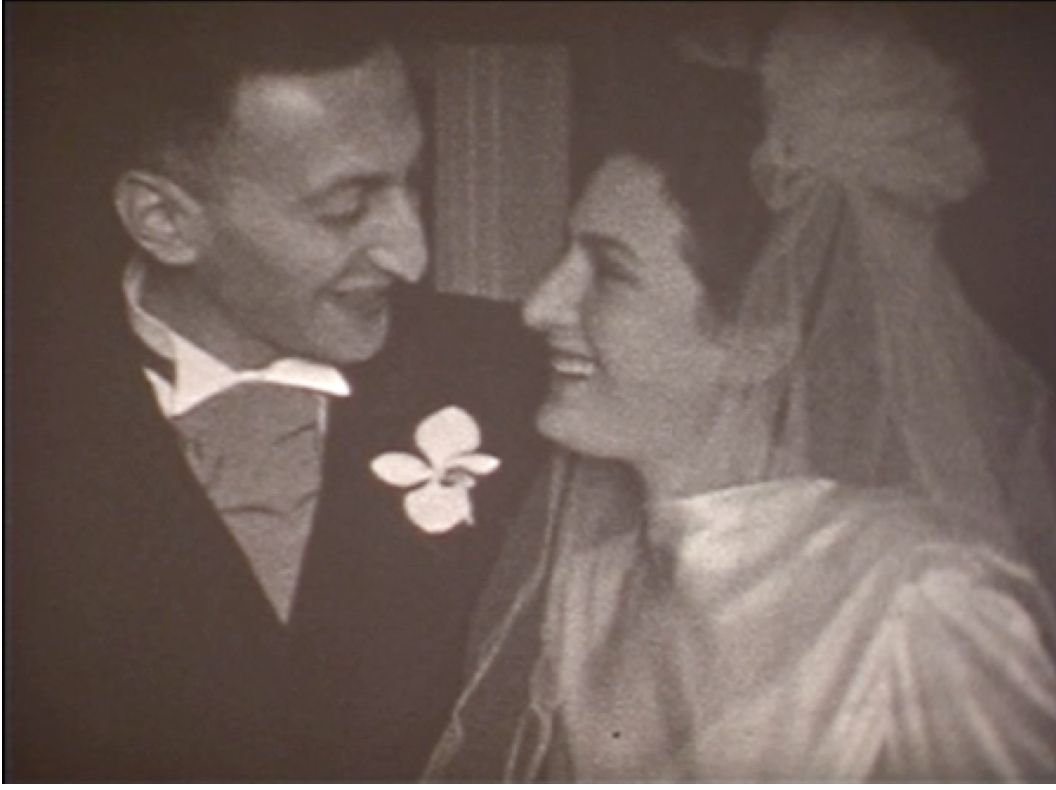 The Frisian Film Archive acquired unique pictures of Jewish Joods Leeuwarden from 1939. Some weeks ago the film archive was surprised by a visit of the Boers family from Amsterdam / Israël.
Yvette and André Boers brought with them a dvd with pictures of the marriage movy of their parents from 1939. The movy shows an insistent impression of Jewish life in Leeuwarden short before the Second World War and contains extraordinary pictures of the Jewish marriage ceremony in the synagogue of Leeuwarden, with main rabbi A.S. Levisson in function.

Barend Boers and Mimi Dwinger marry on April 18, 1939 in Leeuwarden. Three days later they flee from Amsterdam via Lyon, the Pyrenees and Spain to England. They are transferred to a Jewish refugee camp on Jamaica. It is a barren and daredevilish flight out of Europa, with imprisonments in France and Spain.

Vanuit Jamaica Barend is enlisted in the Princess Irenebrigade in Canada. Some weeks after D-Day he lands with the Irenebrigade in Normandy. By the end of 1944 he is one of the liberators of the Southern Netherlands. Mimi works then at the Ministry of Foreign Affairs in London. They survive the war and get three children, Yvette (1947), André (1948) and Marion (1952).

After Mimi's passing away in 2007 a suitcase shows up with documenten related to the atrocities of the war period. There happens to be also a 16mm-movy in the suitcase. It turns out to be the marriage movy in Leeuwarden of Barend and Mimi from 1939. The children are confronted with the hidden history of their parents. Meanwhile they started to distribute the documents to several Dutch heritage organisations. Via the Frisian Resistance Museum they entrusted the marriage movy of their parents to the Frisian Film Archive.

In consultation with André Boers the film archive has described the oictures in detail. You cab see the movy here. A detailed description accompanying the movy and additional information on the flight of the marriage couple follow here after. In 2017 this story got a special follow-up, because the 3 Boers children travelled toegether with Omrop Fryslan along the route of this flight to Catalunya. An article in the Catalan paper Vanguardia of September 13th, 2017 on that.

André Boers expresses in this interview with Omrop Fryslan how you might say a door opened to that traumatic past due to this publicity, about which the 1st generation generally wasn't able to speak. Not among themselves, but also Jewish children often grew up knowing that it was not possible to speak about that sensitive subject.

Exactly that is the motivation behind our project Sjoa Drenthe.
That story should not become a fact like the crusades in the 12th and 13th century, whish you learned without emotions at school, like André says. We as the 2nd generation must continue to pass on this constringent and gruesome story from our young history, because it also has to tell us a lot in the developments around us.
FaLang translation system by Faboba