Numbers of Jewish inhabitants, war victims and survivors in Drenthe 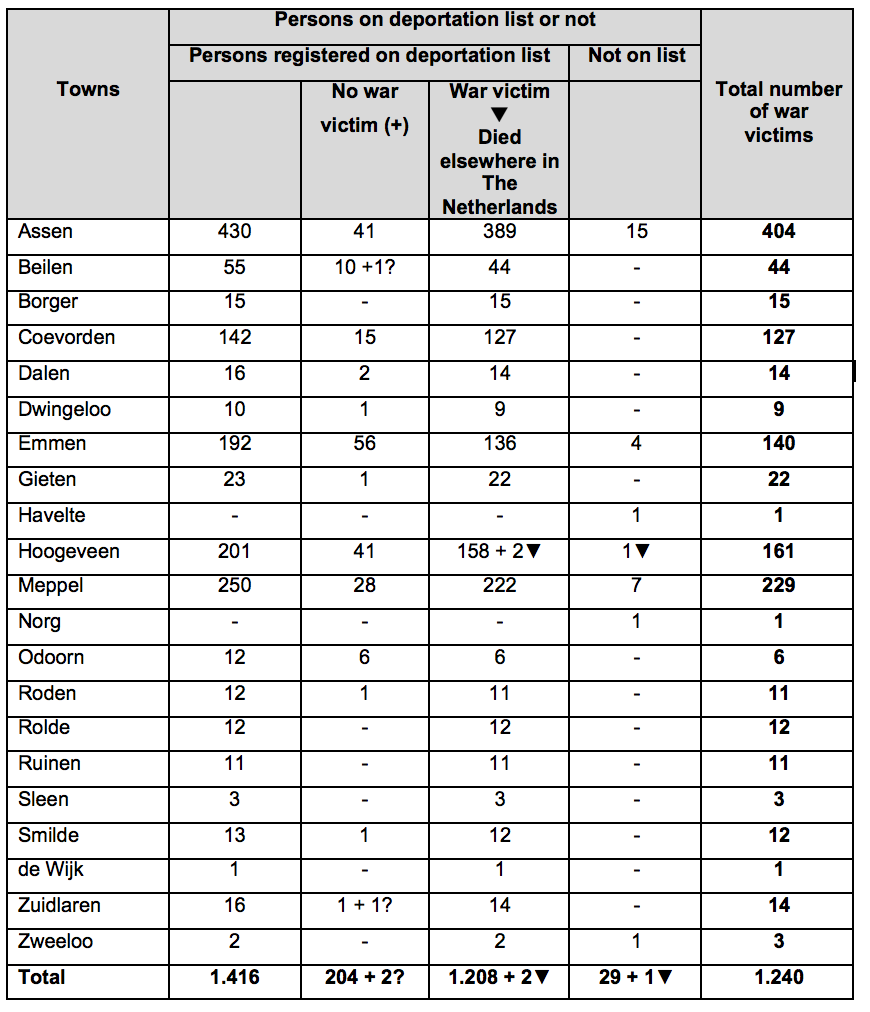 The background of the here by us mentioned figures of 1,446 Jewish inhabitants, of whom 1,237 war victims and 206 survivors *) as best indication for the Sjoa in Drenthe needs some further explanation.
We chose for this approach, because of the lack of reliable sources with hard figures on this subject voor the total period 1940-1945.

Due to the NIOD we have all deportation lists of the province of Drenthe at our disposal (with exclusion of Dwingeloo. The missing list-Dwingeloo is more than compensated by an exellent and extensive book on Jewish Dwingeloo during the war time). This collection was taken as starting point for our research on the genealogical relations between the Jewish families in the province of Drenthe, even though they don't give insight in the total Jewish population during the total period of the years 1940 t/m 1945. They are namely registered in a specific period (the early summer of 1942) with as explicit purpose: the as complete as possible deportation of the Jewish population of Drenthe. Theoretically, at most some Jews may have remained (deliberate or not) outside those lists.
The special nature of these lists is, however, that they are very exact and due to the Digital Jewish Monument we could furthermore exactly examine, how many persons mentioned on those lists, have perished. And in the same way we could further deduct, that it concerns 309 Jewish family names.

Annotations with regard to other sources
According to Hamburger and Regtien there lived “1,448 Jews in the province of Drenthe in October 1941”. It is, however, not clear who they included in that definition of Jews.
•    Is it a religious figure, namely the number of Jews associated with a synagogue? That is to be doubted. In case one would have written to all Jewish congregations - would there after the Sjoa still have been people who would be able to tell with authority, how many Jews were associated with their Synagogue in 1941, while just one of the consequences of the Sjoa was, that much of the congregation's administration had drifted away or disappeared. Would one have had to examine the tens of thousands of family registration cards of the Civil Administration of the municipalities of Drenthe whether people had been member of the Geref. Kerken, the Hervormde kerken or of an Israëlitisch kerkgenootschap?
•    Or does it concern, like the Germans had meant it, a racist figure? It would then become even more complicated, because according to the law civil administrations weren't allowed to discriminate and did not register what someone's race was. The first, also the last, racist census took place in the early summer of 1942; The result of that were the deportation lists, which did not pretend to give a total picture on 1941.
In short, the number of Hamburger and Regtien is difficult to compare with our figures, of pureblood Jews, people with four Jewish grandparents, and halfblood Jews, people with one, two, three or four Jewish ancestors.

The figures of the War memorials are unfortunately not reliable. The list of names on the Jewish monument in Assen is for instance very incomplete: the household staff, the German refugees and the assimilated Jews were not allowed to be mentioned on the monument. In Beilen they mentioned three persons, who did come from Beilen, but lived already for many years elsewhere. Etc., etc.

Finally, the figures of Croes and Tammes can not be exact, since computation of these would have required an impossible amount of time. To explain that: our small amount of 1,250 - 1% of the total - required at least five months of research. Would 500 months of research for their figures be plausible? The figures mentioned by them are thus not the result of own research, but extracted somewhere and don't provide a reliable ground for solid historical research.

*)  The figures in this table are due to intermediate additions to the material not completely identical anymore with the table in the book published in May 2016.